L.E.P. LOCKING ON THE Ejection port 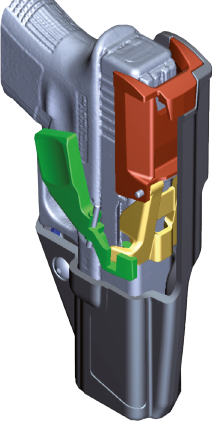 The Automatic Safety System L.E.P - Locking on the Eject Port is a device for blocking and releasing the weapon, made up of an external side release lever connected to an internal support. Thanks to the ergonomic design and two lateral guides, the system sets the intake of a correct hand grip during extraction.

The weight of the weapon inserted in the holster automatically activates an internal locking mechanism that acts on the cartridge ejection window.
The release mechanism is activated by exerting a slight pressure on the release lever with the first phalanx of the index finger. On the move it can be done with the finger slightly arched upwards to avoid pressing the trigger erroneously. The same finger, after having pressed the release, naturally slips on the system guide resting on the cart of the weapon just pulled out. In this way the hand assumes a correct setting during extraction and keeps it during the handle.

The holsters equipped with this system can be used on bulky clothing and regardless of the size of the hands or the presence of gloves.